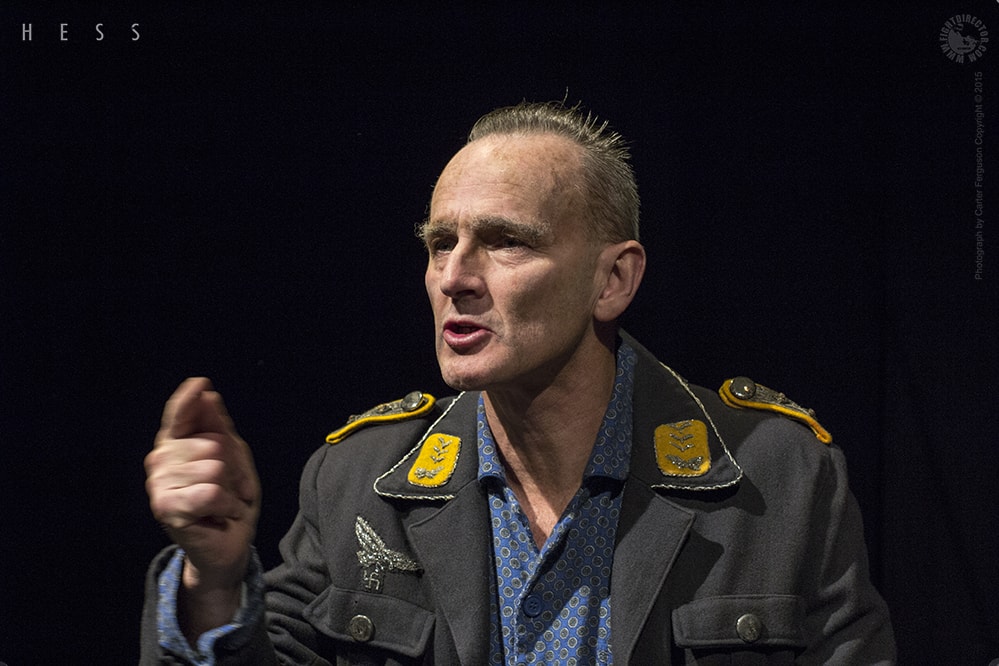 The Gilded Balloon and Kinbur Productions are to revive the full-length version of Michael Burrell’s award winning one-man play, HESS, a poignant and haunting production that has stimulated, moved and provoked debate, whilst also giving a fascinating insight into the nature of evil, retribution, repentance and forgiveness.

A hit of the Edinburgh Festival Fringe 2016, directed by Kim Kinnie and ‘meticulously’ performed by Derek Crawford Munn, HESS will play at Eden Court Theatre, Inverness, on 03 May and The Tolbooth, Stirling on 20 May before it heads to the Prague Fringe from 26 May to 3 June 2017.

In May 1941 Rudolf Hess, Deputy Fuhrer of the German Reich, bailed out of a plane over Scotland on a self-appointed mission of peace. He was immediately imprisoned and later, at the Nuremberg Trials, sentenced to life imprisonment on charges of conspiracy for war and crimes against peace.

HESS is set years into Rudolph Hess’s incarceration in the infamous Spandau Prison. He supposes what he might say to an audience about himself, the Third Reich, and the world we have created since the downfall of the Nazis. Hitler’s Deputy asks the question – how much has really changed? Is it really a better place to live?

By focusing on the essence of Rudolf Hess – the man, his beliefs, his delusions and even his sharp insights into the post war world, Michael Burrell’s superbly written script paints a fascinating portrait of one of the last relics of the Third Reich and the times he lived in.

He deals with the universal questions of the nature of war and its aftermath, hatred, and racism, no matter at what period in history they take place. The recent EU Referendum and Brexit debate have opened up new arguments that encompass the very same issues that are raised in HESS; and the rise of Isis and the immigration issues facing Europe resonate throughout the production. The relevance to the attitudes towards George Bush, Tony Blair and the question of war crimes is also extraordinary.

For further information, images and to arrange interviews please contact:

A selection of production and publicity images can be downloaded from Dropbox – https://www.dropbox.com/sh/8mm83dca6qwdg49/AAA1424NaR6wQ6TzO5PWWP01a?dl=0

In May 1941 a lone parachutist bails out over Eaglesham, East Renfrewshire, Scotland. Rudolf Hess, Deputy Fuhrer of the German Reich was on a self-appointed mission of peace – at the height of the war. He was immediately imprisoned and later convicted at the Nuremberg trials (10/1946) on charges of ‘conspiracy for war’ and ‘crimes against peace’.

Sentenced to life, Hess was eventually locked up in the infamous Spandau prison in Germany. 30 years ago (August 1987) Rudolf Hess, a frail 93 year old and the last remaining prisoner, was found dead in the prison’s summerhouse, having apparently committed suicide.

HESS – The background to the play

Having been incarcerated in the infamous Spandau Prison for decades Rudolf Hess has managed to give his guards the slip en route to a military hospital in an unknown location. He is on the run and takes refuge in a dark and anonymous empty space, coming face to face with the first group of people he has seen since 1945.   This is his one opportunity to talk, to tell his story as he sees it. Hess ponders over what he might say about himself, the Third Reich and also the world we have created in the time since the downfall of the brutal Nazi regime. How much has really changed? Is it really a better place to live?

The original production of HESS, written by and starring Michael Burrell, was first produced in London in 1978. It went on to win and OBIE Award in New York for outstanding achievement in Off-Broadway theatre. It also won the Edmonton Journal Best Show Award in Canada and was nominated for two ACE Awards, including Best Single Play, at Los Angeles 1988. The television film version, screenplay by Michael Burrell, directed by Mark Chapman, won a Bronze Award at the New York Film Festival 1986.

HESS, the award winning one man play by Michael Burrell